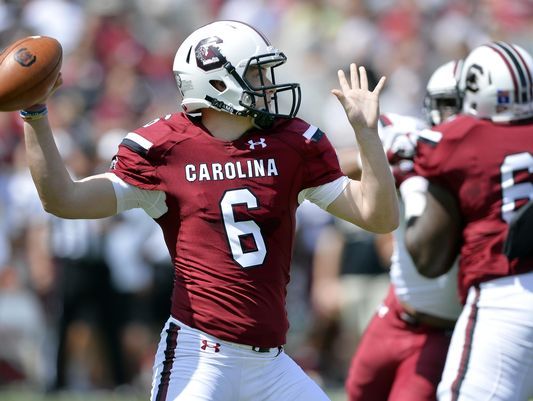 USC enters fall practice without its starting quarterback identified, though Connor Mitch (6) appeared to have the lead after the spring game.COLUMBIA, SC – When the University of South Carolina football team begins fall practice Tuesday morning, several issues must be addressed if the Gamecocks are to rebound from a disappointing 7-6 record in 2014.The issues — and the response to them — will determine whether or not the Gamecocks return to prominence in the Southeastern Conference. What is the plan at quarterback? Redshirt sophomore Connor Mitch appeared to come out of the spring as the player most likely to follow Connor Shaw and Dylan Thompson as the starter, at what has become a highly productive position at USC. (Their predecessor, Stephen Garcia, also had his moments.)But coach Steve Spurrier has maintained throughout the summer that the position is still up for grabs between Mitch and junior Perry Orth.“Their stats were all pretty even,” said USC quarterback/tight end coach G.A. Mangus. “Connor had a good spring. He was where we expected him to be in the spring. Perry is older as well. He knows where to go with the ball and he knows the offense. He knows what we should be in based on what the defense is in. They just have to keep improving on that.”Although Lorenzo Nunez did not take part in spring practice, Spurrier and Mangus have high hopes for the incoming freshman. The question is whether he can absorb enough of the offense by the start of the season.“It’s a lot to learn,” Mangus said. “Some guys plan on playing and then all of a sudden it gets closer to the first game and they want to redshirt. Sometimes they want to go play from the get-go like Connor Shaw did.Nunez will “get a chance to get some (practice) reps and see where he goes,” Mangus said. “He has been into it all summer. We love his upside and love his future.”Spurrier says that while talent is important, finding a quarterback with leadership skills is imperative.“A guy we can all hang our hat on,” Spurrier said about his ideal candidate as a quarterback. “A tough guy — he has courage. He’ll sit in the pocket, he’ll take a hit and bounce right back up. He’s in the game.” Pharoh Cooper and then … ? With the exception of redshirt freshman Deebo Samuel, who Spurrier says enters fall practice as the starter opposite All-SEC selection Pharoh Cooper, no wide receiver stood out during the spring.Wide receivers coach Steve Spurrier Jr. is confident there is talent, but it has to developed.“We met with our guys a lot this summer, which we haven’t done a lot of in the past,” Spurrier Jr. said. “You certainly have to learn by doing, but when you can’t do, you have to watch and learn, pay attention. Just get comfortable with what you’re doing.”Spurrier Jr. has been impressed with freshmen D.J. Neal and Jalen Christian, who arrived on campus this summer. As with Nunez at quarterback, the concern is how long it will take for both to master the playbook. Can the defense turn around? New co-defensive coordinator Jon Hoke has been charged to find a way to resuscitate the defense, which last year finished last in the SEC in sacks and next to last in total defense.While several highly regarded newcomers appear ready to bolster the defensive line, a talented secondary that is a year older returns, and a proven linebacker corps is ready to lead, Hoke is taking things one step at a time.“All we are going to do is go out there and try to build a championship defense,” said Hoke. “It is going to be a day-by-day process. We are going to be very detailed in what we do.” Will USC rediscover a sense of urgency? Spurrier concedes the 2014 team did not train or play with the vigor of previous squads, which had set a school record with three consecutive 11-win seasons.He has vowed that will change in 2015. Reports on the team’s training and workout habits during the summer have been positive.That must continue during fall practice, and will not fully be known until the team plays its season opener against North Carolina.“I think the effort level will be vastly improved on our team this season,” Spurrier said. “We’ll be a faster team and one with a lot more passion, energy. We all know it wasn’t good enough last year.” Who will call the plays? Considered one of the top offensive play-callers in the history of the college game, Spurrier admitted during spring practice that he occasionally allowed others to call plays during the 2014 season.“I plan to be the play-caller again,” Spurrier said during spring practice. “I did delegate at times last year, but I usually took over before the game was over. But I certainly plan on doing it, and I’ll be ready to do it, and go from there.”The offense appeared to be at its best in 2014 when Spurrier was in control. The team’s 42-35 loss at Auburn is the best evidence. Spurrier was responsible for all of the play-calling that night.The Gamecocks rolled up 551 yards total offense, with quarterback Dylan Thompson passing for 402 yards with five touchdowns. Despite the loss, Spurrier was revved up following the game.“He’s fired up about the season,” Mangus said. “I think he is just as involved as he has always been and just as fired up as he’s always been.” FIVE ISSUES 1. Quarterback: What’s the plan?2. Wide receiver: Cooper and …?3. Defense: Can it turn things around?4. Gamecocks: Will there be energy?5. Offense: Will play-calling improve?